Have you ever seen a mangrove swamp?

Mangrove swamps, which sit in tropical and subtropical coastal areas, are wetlands comprised of a unique type of tree with large, branch-like roots that plunge down into the dirt and sand. When the tides change or waves come ashore, their dense root systems act as a web that prevents the ground from eroding and washing away.

The mangrove trees protect the sensitive ecosystem from damage, and make it easier for the ecosystem to recover, even after storms and tidal waves.

What does this have to do with resilience?

If you think about it, we are all subject to (metaphorical) changing tides, storms, and tidal waves.

Our circumstances get better, then worse, then better again. Or just when everything seems to be going great, we get sick, or lose money, or lose a relationship. And every once in a while, we experience a truly catastrophic experience that threatens to wash our entire beach away.

A resilient mind, though, is like the mangrove swamp. It has deep roots that protect it from the insults and stress inherent in daily life. When bad things happen, the resilient mind bounces back. The resilient mind can recover from, and find meaning in, even the most painful and difficult experiences.

A story of resilience

Anthony, a young man I treated for Post-Traumatic Stress Disorder (PTSD) at the VA Hospital, was only 22 when he enlisted in the Army in 2005. He was soon deployed to a combat zone in Afghanistan.

When he returned a few years later, he was a shell of his former self. His marriage had unraveled, and he was estranged from his 5-year old daughter. He had developed the habit of constantly looking over his shoulder and worrying about his surroundings. Even though he dreamt of going back to school, he was too terrified to set foot on a college campus. His friendly and affable exterior hid an inner well of pain and fear.

Don’t worry—the story ends well for Anthony. But before I tell you more about him, I want to talk a little bit more about resilience.

What makes a person resilient?

What is the difference between someone who is resilient and someone who is not? What factors make it possible for some people to bounce back from stressful experiences?

Studies suggest that there are several features of resilience:

When Anthony and I worked together, we spent a lot of time talking about his experience in the war as a way to habituate him to his fear (a primary component of therapy for PTSD is exposure). But, talking about the experience was not enough.

With practice, Anthony was quickly able to do things he had avoided for years, such as going to grocery stores at rush hour and sitting in crowded movie theatres. He even signed up for classes at a local community college.

However, he was still overcome with guilt that he had survived when many of his closest friends had not. He felt unsure about his future and what he wanted to do with his life. He needed help reframing his experience into something positive. He needed help understanding what had happened and finding meaning in it.

The work of strengthening roots in your own mangrove swamp comes with challenging negative thought patterns, over and over again. You build your ability to reframe experiences like a muscle—with practice.

With Anthony, I used a specific exercise to help him reframe his experience, called the Automatic Thought Log.

First, I had him write down a distressing, negative thought or assumption. He chose, “It’s my fault my friends died—I didn’t do enough to help them.” Then, I asked him what percentage of him believed this was true. He said,“90%”

Next, I asked him to tell me all the evidence that it was true. He gave examples like, “My partner died and it was my job to protect him” and “I didn’t call the medic fast enough.”

Then, I asked Anthony to tell me all the evidence that his assumption wasn’t true. I asked him specifically to imagine he could talk to his good friend who had been killed in front of him. What would his friend say? Would his friend blame him for not saving him?

In this moment, a light bulb went off for Anthony. He realized right away that no, his friend wouldn’t blame him, and more than that, he would want Anthony to move on with his life and find happiness as a way to honor him.

After the exercise, I asked Anthony what percentage of him still believed his assumption was true, and he answered, “40%.” It wasn’t zero, but he was moving in the right direction. I could see a thicket of mangrove roots plunging into Anthony’s swamp right in front of me.

Over the next few months, Anthony continued to work hard to process many difficult emotions, including his fear, his guilt, his grief, and his regret. As he did, his life transformed.

He started school with a fierce resolve: He would graduate college and then apply to a social work program so he could work with young veterans just like him, and help them reacclimate to home after returning from war. He had found a new purpose. He had found meaning in a terrible experience.

If Anthony can do it, so can you. What could you do to help cultivate your own mangrove swamp? 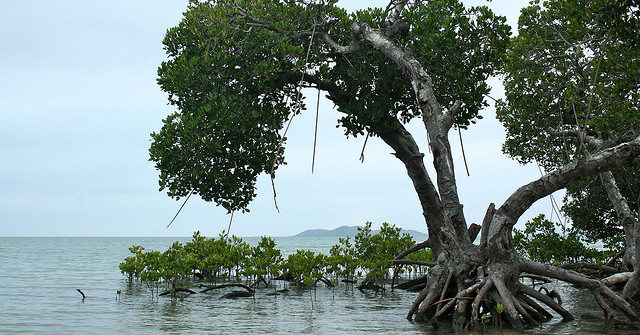 Elana Miller, MD writes at Zen Psychiatry. She is a psychiatrist who's passionate about integrating western medicine with eastern philosophy to help people live fuller and happier lives. To get more articles on improving your health and happiness, join her weekly newsletter.

Audiobooks - turn "dead time" into "learning time" by listening to books while commuting, working out, cooking, or any other activity you do. Audible has the world’s largest audiobook library and you can listen to any title free with a trial of the service. Click here to try Audible.

Online Therapy - get effective, confidential, and convenient access to a licensed therapist at a relatively low cost when compared to traditional face-to-face services. Click here to try Online Therapy.

10 thoughts on “Building Resilience and Cultivating Your Mangrove Swamp”