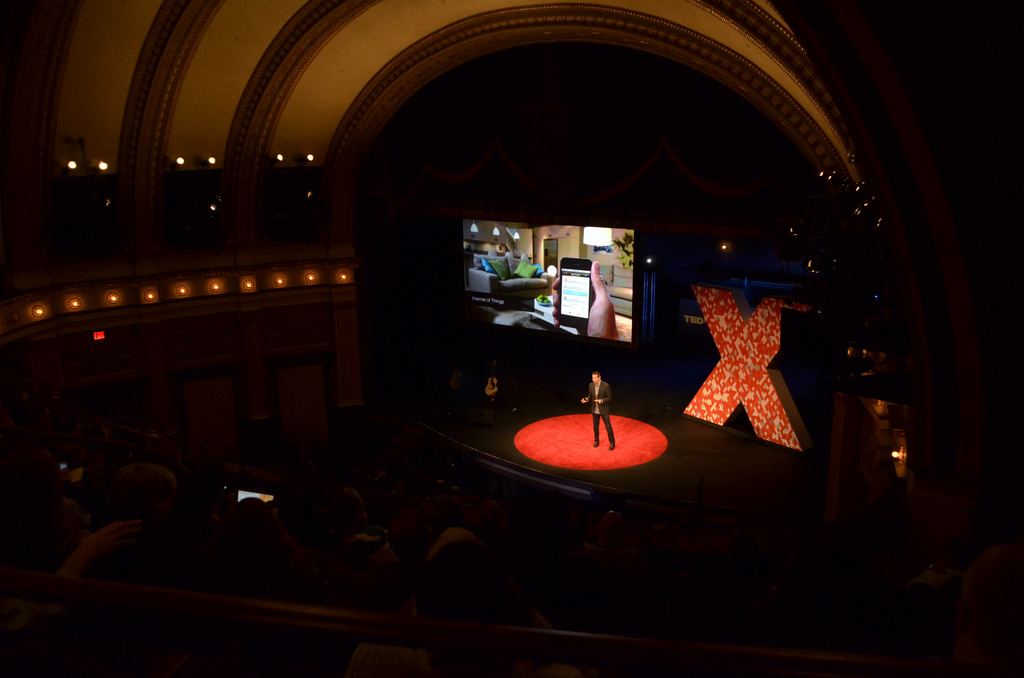 As a writer the next most coveted honor and opportunity beyond being published was speaking. To speak in public in front of hundreds of people seemed more immediate, more impactful, (not to mention way more scary) than having tens of thousands of anonymous readers. And what better way to be true to your words, outside of writing a book, than to share them with a live audience, allowing them a raw unobstructed view to your inner most thoughts.

Not all speaking gigs are created equal. For me the most coveted speaking gig was a TED talk, so I was floored and amazed when in 2012 just after my memoir was published I got a note on Facebook from an old friend of my sisters now living in Santa Cruz California who it turned out did PR for TEDx Santa Cruz. It wasn’t the “real” TED conference, but hey, I thought a great start. And weren’t some of the “best” the most engaging and insightful, if not popular TED talks actually TEDx talks? Hello Brene Brown, Hello Cameron Russell.

After numerous screens, conversations and edited pitches with the organizers I was accepted and then scheduled to speak at TEDx Santa Cruz in September 2012. I was at first elated and then startled by this act of daring. There’s was a mighty fine production at a gorgeous 400 seat theater on the Cabrillo College campus; flashy lights, multiple cameras, influential line-up. I would have 12 minutes. NO NOTES, no prompter. I started to get nervous, and then nauseous.

To be fair, this was not my first go round at the rodeo. I had taught in the front of classrooms for years, goofily cheering on third and fourth graders about how to write poetry, had given dozens and dozens of poetry readings from dive bars to university classrooms, and even a few talks at the local Chamber of Commerce. But something about the TED brand, the production and the spectacle of it all grew larger and larger in my mind gnawing further and further into the recesses of my ego as the day approached.

The initial nervous sparks turned into a recurring stomach ache, and then a chronic nauseous dread settled in. I scoured the web for speaking tips and principles on how to give a great TED talk. I watched a million TED talks overwhelmed by the great ones, baffled by the average ones. I joined Toastmasters and even felt pretty good about myself for thirty seconds or so, because of all the newbies at Toastmasters taking a brave pill and sputtering away for the first time.

Watching Brene Brown and Elizabeth Gilbert just filled me with a more acute terror. They appeared so spot on, so passionate, so at ease with themselves.  I wrote and rewrote my talk four hundred and twenty seven thousand times. I finally settled on something I thought was fairly decent. I read it and reread it. I read it out loud in front of the mirror, to my dog Jupiter, to the planet Jupiter, to the canopy of trees and the stars beyond. Over and over again I read until I was almost sick of it. I tried to embody my talk with dynamic gestures, imagining myself practicing some arcane actorly rehearsals  as I were Sir Richard Burton gearing up for MacBeth at the Royal Shakespeare theater. I was going to be alive on stage, in my body and deliver something PROFOUND dammit. And I was NOT going to forget one squirmy little line.

My memory has never been good, nor have I ever been particularly quick on my verbal feet. I wasn’t adept at ad-libbing or being spontaneous. This would spell certain doom. So I committed the talk to memory. The day approached and I was close to complete mental and physical embodiment, but my fear kept chewing away at an absolutely flawless delivery.

I arrived at the theater filled with a drop of excitement drowned out by a leaden sea of dread. I met up with the organizers who told me casually to settle in and relax, it’s going to be great and then with a cute little pat on the back said, “Oh and by the way, you’ll be closing the whole event. No pressure.” They chuckled. I gasped and sputtered turned pale with fright, tried not to throw up at their feet. “You’ll do great” they assured me.

I went back to the green room doubled over in terror. I tried to talk to the other speakers but could only nod distractedly, grunt and moan. They smiled politely and moved away from me. I paced around back stage shaking and wringing my hands, alternating back and forth from sweating to shivering. I went for a walk around the building muttering to myself about the virtues of food trucks rather than practicing my lines. I attempted all manner of breathing exercise and meditation technique. Nothing seemed to help, except surrendering to extreme bodily discomfort. I even got some bodywork done back stage. I was in over my head. I should bail, claim sudden illness, politely bow out.

The day crept on agonizingly slow, closer and closer to my twelve titanic minutes of shame and disgrace. I had a hard time listening to, let alone appreciating the other speakers. And then there I was suddenly being wired up and introduced. I practically ran out on stage, not so much excited, as bewildered into motion as if being pushed into traffic. If I ran at the cars maybe they would swerve around me. But after a couple steps all I could muster was a limp jog. The cars revved their engines and sped toward me, headlights and shiny grills stared eagerly at me, waiting for me to regale them with profound insight, wisdom and beauty in a voice of startling authority and warmth.

I started talking and let the words fall out of my mouth like small pieces of broken glass. I was half-expecting to begin with a shrill high-pitched squeak, for at least my voice to crack and shutter. But instead there was a terror-fueled mechanical propulsion coming through me from some distant planet. The words marched out of my mouth as commanded. I was following along nicely keeping an edgy pace, not even losing my thoughts. Maybe I’m on a roll I thought between sharp blooms of abdominal pain. Until 10 minutes and 40 seconds in where I was just revving up for my big epiphany, the denouement, my irresistible “call to action” —I was going to get a TED ovation dammit!

But instead I blanked. I stumbled over one of my lines and then lost track and went mute. There was mostly nothing there except a tangled pile of broken sentences far off in the foggy distance. That, and of course a blaring silence baring down on me with such intensity, that I had to jump out of the way to avoid being crushed to death. After far too many split seconds of the lights above me burning a hole in my scalp and drowning in the agonizing silence, all I could do was shrug my shoulders and say “I guess that’s it.” I ran off the stage tail clenched tight between my legs my whole body vibrating with a grating devastating humiliation followed by a lazy puff of relief. In that moment I could at least go crawl back into my little egoic hole of pride and invisibility, and if nothing else, be done with this god awful smoldering dread searing a hole in my stomach. I was free to go back to being ordinary. What a relief. Sort of.

Here we are a few years later with a hair of perspective thinking about the virtues of lambasting myself for all the things I didn’t do during that talk. How I didn’t connect with the audience. How I could barely even see them, which made me feel for a second maybe they couldn’t see me and I’d be OK up here babbling away in a halo of invisibility. How I realized I wasn’t actually speaking to them, because I was so busy trying to stay on task with the memorization, with the proper gestures and pauses. How even though I was talking about vulnerable things I wasn’t actually being vulnerable. How I constructed a huge wall of perceived strength, memory and togetherness which crumbled immediately. How I wasn’t actually being in the emotionality of my experience. How I was too busy trying to get it right, trying to say the right thing, trying to be the star of the show. How it was all about me, when it should have been all about them.

This is what great speakers (and writers) do, they make it about the audience, they connect with the audience first and foremost. They are not preoccupied with themselves with being seen in a certain way, with being loved, appreciated and understood, as nice as that is. I thought I had mastered that after all the teaching and speaking I’d already done. When I spoke to kids it was always about them. I rarely got nervous. I created this whole big thing around the importance of TEDx and of getting the ovation and having it launch my career like it did for Brene Brown, and instead I carried on like a self-conscious madman. And in spite of it all, the truth was I actually gave a pretty decent talk. I actually think it’s one of the best talks I’ve ever given, in terms of content. It’s just that my delivery was completely self-reflective, even self-absorbed, leaving little space for anyone to hear it!

Not only am I glad I did it, but I am grateful for the opportunity, the patience and kindness of the audience and organizers. It felt thrilling and necessary, like a great act of daring. In the process I learned more from that failure than any previous success I’ve had. Most importantly about how next time, in order to be true to my words I need to embody that truth not only in the process of writing, but also in the process of speaking those words aloud with authenticity and conviction!

As Theodore Rossevelt said more recently via Brene Brown, “. . . and who at the worst, if he fails, at least fails while daring greatly. . .” One step closer to daring greatly in order to be true to my words both in writing. Thank you Theodore and Brene. May you be moved to dare greatly yourself. Just don’t forget to be vulnerable, connect to and be with the audience, remember it’s about them, feel free to forget yourself and there you’ll be, true to your words in heart and mind!

Albert Flynn DeSilver is an internationally published poet, writer, speaker, and workshop leader. Albert served as Marin County’s very first Poet Laureate from 2008-2010. His work has appeared in more than 100 literary journals worldwide. Join him for discussions about writing and poetry and upcoming events at Facebook.com/Albert.Flynn.DeSilver.Author

17 thoughts on “Failing Greatly: How I Finally Got a TEDx Talk, Bombed, and What I Learned from the Experience”