If I could summarize my world for you in one sentence, it would be: chasing my toddler. I know the back of my daughter’s scruffy blonde head anywhere: dashing across the living room, making a break for the next grocery aisle, or attempting to go up the slide (much more fun than going down). My old day job required me to attend meetings and sit in front of a computer most of the day. Now, I’m lucky if I get 10 minutes to sit down for a breather before my girl has me running to catch up with her.

I’ve never raised a child before, and given my personality, I decided to read about it. All the toddler self-help books talk about what you need to teach them: how to play with others, learn language, go potty. These books contain great advice for child rearing, but none discuss the things parents learn from toddlers. I have learned at least as much from my daughter as she has learned from me. So here are some tips for living from someone who just started her life journey:

1. It’s your duty to question everything.

But “whys” are a good thing. They demonstrate curiosity and a thirst to understand the world. More importantly, they force us to evaluate all of our decisions. Toddlers don’t like to follow a rule with a weak “why,” and neither should adults. So if something bothers you, question it. Don’t like the answer? Channel your inner toddler and take action. You’ll feel better in the long run (especially on ethical decisions) if you always ask “why.”

2. All skills take practice, but you’ll get there eventually.

It is amazing how very little a baby can do at birth. He can’t see or hear well. Many babies struggle with the sucking reflex, so they can’t even eat well. When you watch a baby grow, it’s amazing to watch him master the ability to move and manipulate things, including himself. It literally takes years. Reasoning takes much longer. (Some parents of teenagers might argue that day never comes.) And how do we learn all of this? By doing it day in, day out for years at a time.

So as an adult, if you’re trying to learn a new skill, you’ve got to be patient and put in the time to learn something new. Toddlers thrive on doing the same things over and over again, and that’s how they become master walkers and talkers. Don’t get me wrong – toddlers are rarely patient. My daughter can cry with the best of them when she encounters a container she wants to open and can’t. But she works at it constantly until she does eventually open the box (usually to my frustrated sigh as I go find a broom).

3. There is opportunity in destruction.

Before my daughter was born, I saw the world as a place where I could create. I could find connections and establish a career. I could open up my computer and write a story. Opportunities abound in this world because I can build in it.

Toddlers like creation, but many value destruction even more. I stack blocks, my daughter knocks them down. At first, this frustrates an adult, especially when something you cherish has been ruined by your child. But there’s opportunity in destruction too. When your child scribbles marker on the wall, you have a chance to paint it a nicer color than its original boring beige. For a more adult-oriented example, perhaps you’ve been pigeonholed as a great accountant, but you’d rather be a carpenter. Casting away your old career for a new one can be more rewarding than building upon what you already have. Sometimes the greatest joy is found not in the creation, but the destruction, of something you’ve built.

4. Go outside as often as you can.

The outdoors is a magical place for a toddler. It doesn’t matter how many toys, books, and interesting things I shove in a room, it can only hold her attention for about 30 minutes (if I’m that lucky). Then I’m stuck either listening to her whine or taking her someplace else. This rule does not hold true if my toddler plays outside. We went to the beach the other weekend, and my daughter had no trouble entertaining herself for nearly 4 hours.

I used to spend a lot of time outdoors through my college years, but once I entered the “real world,” I’ve been less committed. I feel a lot healthier now that I spend more time outside with my daughter. Even if it’s just sitting on the front steps, the outdoors is at once more relaxing and exciting at the same time. It’s relaxing because natural noises lull you in the place of electronic ringtones and computer clicks. It’s exciting because all sorts of things can and do happen: you chat with your neighbors, a helicopter flies overhead, or a large butterfly catches your eye. I now value outdoor time as much as exercise and eating right.

Toddlers have little emotional restraint, and as parents, it’s our job to teach them how to work through emotions so they can live a normal life. But when it comes to love, toddlers have the right idea. They have no qualms springing a hug on you, even if it means nearly tripping you in the process. My daughter’s kiss is the best gift I have ever received in this world. She gives it at a moment’s notice, and it is always accompanied by the most genuine smile. The feeling it evokes cannot be described by ordinary words.

Imagine the world with more toddler love. It’d probably involve more chases and tickling, but I could live with that.

What have you learned from your children? 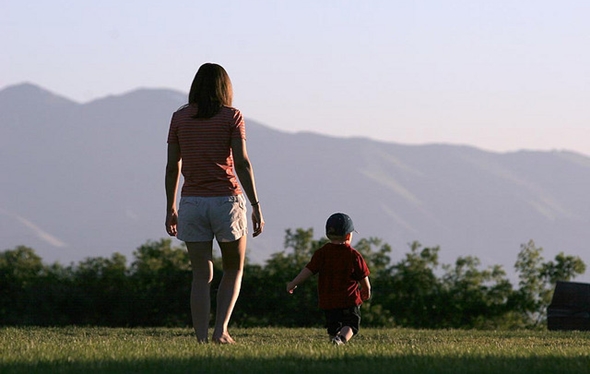 31 thoughts on “5 Lessons Learned from a Toddler”