“The only time we suffer is when we believe a thought that argues with what is. When the mind is perfectly clear, what is is what we want.” – Byron Katie

When I was a kid, I always felt compelled to play by the rules. I walked throughout the elementary school hallways  when I wanted to run, waited for my parents to sort out my Halloween candy into rations before diving head deep into my pillowcase full of tootsie rolls, and even tried my best to control my self-expression (talking) throughout a decade and a half of schooling. Whenever I deviated from the particular socially accepted etiquette, I felt uncertain and uncomfortable.

As I got older, I noticed that many of the kids around me were breaking all sorts of rules. In the midst of the most awkward years of my life, middle school, bullying started to show its face. Cliques began to form and rebellion felt like a natural form of expression for others. Yet, I still was too damn chicken-shit to participate. I can still remember how I felt when I was sent to the principal for being part of a ‘food fight’ in 4th grade. My food fight participation had more to do with fitting in as I sneakily tossed my empty Yoo-hoo box across the cafeteria.

That experience was followed by another rebellious one… I got a detention for drinking water during my freshman year of high school. Yea, I know what ya’ll are thinking? This dude is an absolute REBEL. Well….not exactly.

While I did feel quite alive after ‘participating’ in the food fight and confused about my 9th grade history teacher’s water policy, I did know this: I was continuously looking for permission before I acted.

Moving forward, this behavior began to clearly seek deeper repercussions than the detention and short suspension for the chocolate milk throwing and the rebellious water drinking.

Imagine creating a belief that said behaving in a certain way would prevent you from being judged, getting in trouble, or face rejection? Would you be inclined to behave like this?

For about a quarter of century, that was a belief that I held closer than that pillowcase of Halloween candy.

I was constantly seeking permission. Am I allowed to do this or explore that? I needed rules…..I craved ultimate certainty that what I was doing was ‘correct’.

I believed that what I would see others do, wear, and act was how I was supposed to act. Everything that I was told, I believed. I was completely under the control of my environment and surrounds, or so I thought.

So what did I sacrifice in order to seek permission?

As I began to form my own thoughts around societal influences, I noticed how disconnected I actually was from my core truths. I sought permission from others to act in a way that they found ‘acceptable’ while looking for the behavioral choices that would lead me towards acceptance and out of trouble.

During year twenty six, I decided that it may be time to disrupt the rabblement. What would happen if I decided to grant myself permission?

What if I allowed myself to be: MYSELF.

Without allowing fears, doubts, or rules guide my actions. What would life look like?

I gave myself permission to:

Go to bed at 11pm. Give up alcohol entirely. Travel without plans. Speak before thinking. Be kinder to myself and others. Express my desires to women openly and honestly. Embrace my emo-bro side.

I can’t grant you the permission that you’re seeking. Your best friend, parents, or significant other don’t have the power to give you this right either. That permission must come from within.

We’d love to hear you courageously share what you are ready to give yourself permission to do in the comments below! 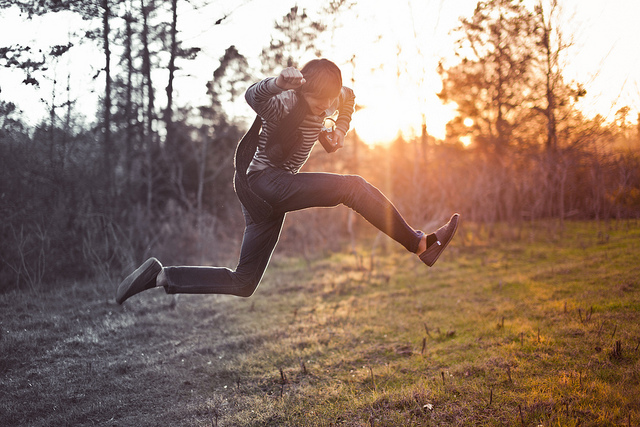 I'm Josh Barad, founder and CUO (Chief Uncomfortable Officer) at In The Middle Seat. I help the peeps of my generation lead more meaningful lives through living uncomfortably.