I was recently asked to be godfather to a very special young man; the ritual requires godparents to oversee the lad’s ‘spiritual education.’ Not being a great churchgoer, I thought I’d rather leave him my thoughts on what it takes to be a good man, if not necessarily a religious one.

I just saw a movie with the boy’s mom; it was called The Descendants, starring George Clooney. Afterwards she described the main character as a ‘good man.’ It occurred to me what an undervalued concept that has become in today’s society; men today tend to think of themselves as successful or not successful, sexy or not so much, cool or nerds.

So what does it mean to be ‘a good man?’

I don’t think ‘a good man’ should be confused with ‘a perfect man’. In the movie, George’s family certainly doesn’t see him as perfect; as the movie starts, he’s a workaholic who is largely clueless about their emotional lives. That’s why his wife has looked for attention outside of the marriage and his oldest daughter has turned to drugs.

But by the film’s end, you feel that George will get there. For a start, he has good intentions; and importantly, he is no coward. You just know he will turn everything around eventually.

So what follows is something I’d like to say to my young godson for when he’s older. I’m still trying to learn a few of these things myself. Maybe he’ll get there before me …

1. Always try to be kind. This is not as easy as it sounds, especially when you’re hurting; but this is the time you need to be kind the most.

2. Do not confuse kindness with trust; both women and men should earn that from you, because some people take advantage of kindness. But this fact is absolutely no excuse for cynicism, okay? Stay cool.

3. A firm handshake and eye contact is important. Other men will judge you by it.

4. Never. Ever. Ever. Hit a woman or a child. Do it even once and forget about calling yourself a man.

5. Learn to manage your money. You won’t get far without it. But don’t let it manage you.

6. Play team sports. You’ll learn a lot about other guys on a football field; it’s about friendship and character and courage. If a guy doesn’t keep your back in game time, he won’t do it any other time either.

7. Stand up to bullies. Especially when they’re picking on someone else.

8. Know what you believe in so you can stand up for it. It will also help you to know when you are wrong.

9. For God’s sake, tell the truth. Then you won’t need a good memory.

10. If someone breaks your heart, don’t play tag and pass it on to someone else.

11. Friends are precious. You’ll soon find out who they are; they’ll be the ones still buying you a beer after you have made your first monumental and public screw-up. And yes, that will happen, too.

12. Open doors for ladies. It’s what my dad taught me, and I still think it’s a good rule. And don’t let a woman walk alone across a car park in the dark, even if she’s just broken up with you.

13. A gentleman walks on the outside of the footpath to protect women, children and older people from passing traffic. Sounds cheesy, but do it anyway.

14. Be good to your mother. You have no idea what she did to get you this far.

15. Never let fear stop you from doing what’s right. Sometimes you have to stand your ground, regardless of consequence. When the time comes, you’ll know.

16. Remember you live in a world where everyone has a cell phone camera. Even if you don’t care about God watching you, you should at least worry about Facebook.

18. If your kid says, “Come and play daddy,” don’t say, “Maybe later.” If you don’t make time, right now, you will live to regret it. Guaranteed.

19. Remember, no one is brave all the time. Because we only need guts when we’re afraid. And the day will come when you will be very afraid. On that day, find your courage and stand up for what you believe in and who you love.

Remember, that little kid sitting in front of the TV with his face covered in chocolate and a crayon in his hand trying to draw on the dog is going to grow into a man one day.

And when that day comes, we want him to be a good man, right?

But it all starts with us. We can tell our boys what to do, but in the end they will take their lead from how we live and who we are.

So if you’re wondering right now what sort of man he’s going to be, that’s good.

If you’re still worrying about it all day tomorrow, that’s even better.

Being a father is a tough task, but if you do it well, the world will thank you for it and so will he.

So now is as good a time as any. Write your own son a letter, and describe to him what a good man is.

And then tomorrow get out there and be that man. 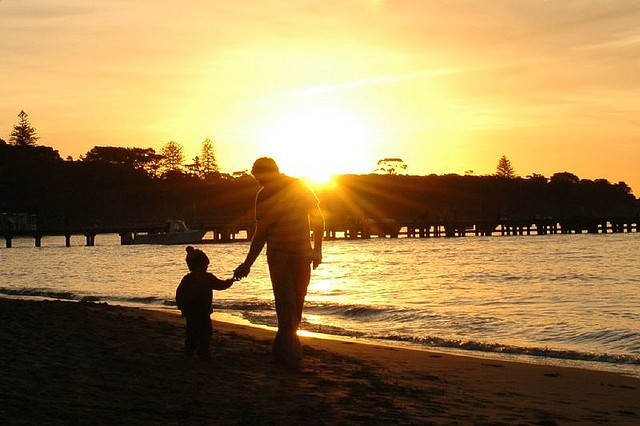 Colin Falconer is the author of more than forty novels - and has travelled widely for research, running with bulls, diving with sharks as well as trying to be a better man. Go to his blog to read more about life, movies and writing bestselling fiction.

5 thoughts on “How to Raise a Good Man”