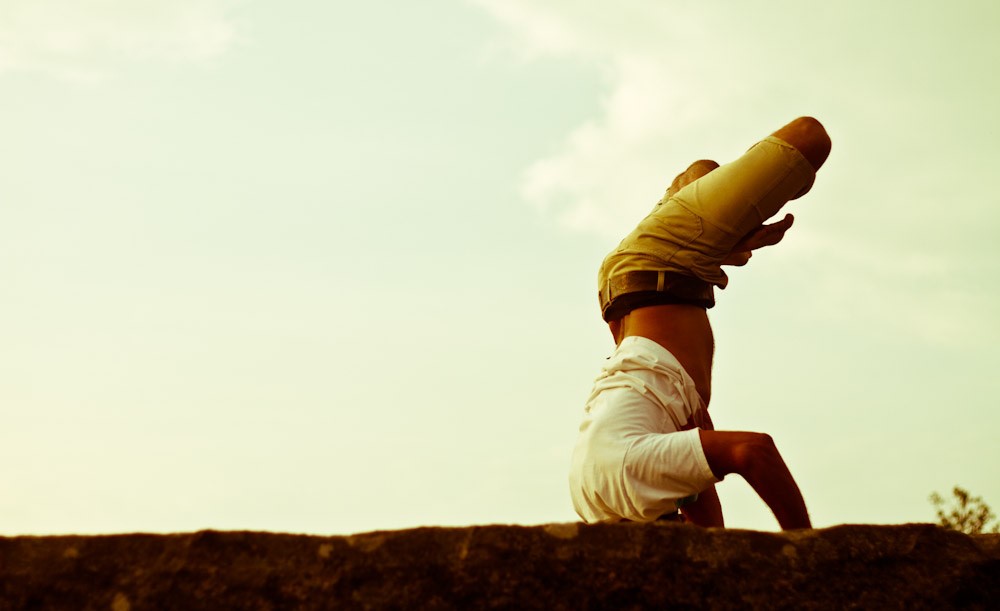 “Yoga is about clearing away whatever it is in us that prevents us from living in the most full and whole way.” – Cybele Tomlinson

When I was eight, my father signed me up for a football competition called Punt, Pass, and Kick. Over 50 kids entered, mostly 9 and 10 year old’s who in my eyes looked old enough to sport mustaches. But thanks to a kick that outdistanced the others by an easy margin, I came in third place. After that, I was hooked on kicking footballs. I spent countless hours at the field near my house, kicking some nights until the sun went down and other days when two feet of snow covered the field.

Soon I was playing Division I football at the University of Pittsburgh. During the off season, I’d spend 4-5 hours a day kicking 100 balls at a time and the rest of my day lifting, jogging, and sprinting. I took my “kicking notebook” to the field, where I’d write down how many kicks I’d done and from which distance, as if solving some sort of mysterious math problem. No matter how tired my leg got or how much pain I felt, I didn’t stop until I hit my goal number.

When you kick a football, you repeat the same motion every time. It creates amazing torque in your back and hips. During my senior year, I started to feel pain in my low back and hip flexors. I went to see a chiropractor, and the trainers gave me Flexerill to manage the muscle spasms. But instead of resting, I added wind sprints, hills, and steps to my regime. I started to have literal pain in my ass and shooting pains down my leg. Sometimes I had to crawl on my hands and knees to make it to the bathroom. Yet I slugged through the pain for the entire year. At the end of it, I led the nation in field goal percentage at 83%, at one point making twelve in a row.

I managed to gain the attention of several NFL scouts.  I signed a contract with the Detroit Lions but I was cut before the season began, when my tired leg failed me. Then I signed with the Indianapolis Colts and again was cut when my strained hip flexors couldn’t survive camp. And then came the New York Jets. After a day of kicking in which I struggled to land the ball in the end zone, I decided it was time to talk to someone. I knew if I showed the team doctor my injury, the Jets would cut me. But I was low on options.

I explained my history of back, leg and hip pain, and the doctor went through a series of strength tests. When he asked me to lift his hand with my right leg, I felt like I had nothing to give.

Then he examined my hip flexors. The hip flexor is at the very top of the thigh, where it connects to the hip. He dug into the left, and everything seemed fine after just a few seconds of poking around. He started in on my right side. A few seconds turned into a minute.

“I’m having a hard time finding your right hip flexor muscle,” he said.

“I’m afraid that your hip flexor has completely degenerated from overuse.”

Game over. I’d always heard the players’ saying that NFL stands for “Not For Long.” In my case, they were right.

I knew it was over, but I felt lost. I flew back to Pittsburgh kicking myself for destroying my body. I was angry, upset that I’d disappointed myself, the Jets, my parents, my wife Karen, and my daughter, Sadie. I was depressed, too, by how my body felt. For years I was a top athlete. Now my body was broken, and nothing made it better: no pill, no amount of rest. Even the chiropractor offered only temporary relief. I needed something else. But what?

Karen had been suggesting yoga for years. Finally her enthusiasm caught on, and I decided that instead of doing my normal weight routine I would try Karen’s classes once a week.

My need to push myself to the limit made yoga really tough at first. I’d get frustrated when I struggled with a pose. My body ached. I was stiff as a board. I didn’t realize until then how injured I was and how limited my mobility had become. In frustration I cursed my body. I hated yoga because I thought it was too hard. But it wasn’t that the practice was hard; I was just trying too hard. It was me.

After a while, something clicked. First I started breathing. Karen had reminded us to breathe, but I hadn’t been listening. Once I was breathing, I also tuned in to other signals. I’d only go into a pose to the point where my body told me to stop. After class, instead of feeling beat up, I felt strong, light, and rejuvenated.

I got the yoga bug. Once a week grew to twice, then three times a week. My muscle spasms and back pain, which had been happening four or five times a day, dwindled to just once a day, then once a week. I started feeling youthful again. I eventually dropped my gym membership and did only yoga. The back spasms faded to just once in a blue moon. I had healed my back through yoga. The practice satisfied my need for a strong workout, but I wasn’t destroying my body in the process.

I figured out that I didn’t have to beat the crap out of myself to accomplish something. I’d always been in a rush to attain my goals by any means necessary, but that approach wasn’t effective in the long run. Not only would I still have made it as far in the NFL by training less, I actually would have gone further. When I learned that I could work hard without harming myself, I began to live with intention instead of ambition. Yoga isn’t just my physical exercise; it’s a spiritual practice that has changed the way I live, increased the compassion with which I relate to others and myself, and has given me a fulfilling, inspiring career. So long, pain in the ass. Hello, asana.

How could yoga make a difference to your life?

Sean and Karen run one of the largest and most successful Yoga Teacher Training Certification Schools - in Costa Rica, Mexico and Pittsburgh. They have over 25 years of combined experience teaching classes and training over 1,000 students to become teachers.

11 thoughts on “From NFL Football Star to Yoga Fanatic”