I was (ok I’ll admit it, still am) a quite disorganized guy. In addition, I have a reputation for outstanding achievements at different competitions in the domains of physics, sociology, languages, chemistry, and so on. Due to this quite bizarre combination I was known as the slothful genius of the school. Now, regarding being a sloth – I admit my bad ways and do my best to improve. Regarding being a genius – oh boy, I don’t like to call myself one. Oscar Wilde, Albert Einstein, Mahatma Gandhi – they are the geniuses. I might earn the title one day, but that’s far from now.

Being a “slothful genius” I was confronted with comments such as “Boy, you are wasting your opportunity!”, “Boy, you are capable of so much, why don’t you make use of what you have?” and “You can’t even imagine how it feels not to understand a math problem, use your brain, don’t be so lazy!” (by the way, the last comment is tommyrot). Except for some really good friends, most of the people who said these things said them because they were happy that I wasn’t doing my best.

Then I decided I needed to change. I set aside time for schoolwork in the afternoon, I organized my wake-up routine so I would never be late for the first class and decided to shave more regularly. Looks tell more then you’d believe.

There were some people who observed that I was finally following a path that would seed better results, and that made me a lot happier. They started to treat me in a more respectful manner, teachers as well as classmates.

However, the majority of people initially wouldn’t admit that I was making changes. They had gotten so used to my old behavior, they didn’t even observe that I was trying to get better organized. This might happen to you, too, and it might happen for different reasons. In my experience, people are more happy to know you behind them, than to know you in front of them.

Don’t be afraid. This does not mean that if you improve, people will stay away from you. First of all, real friends stay with you and do a high five. Then, after just a very short while, everyone else gets used to the fact that people – including you – do change. If you stay nice and friendly, this issue will vanish.

Accept Your Flaws, But Don’t Be Proud Of Them

You should always be aware of your flaws, how you can change them, and why you are going to change them. It took me awhile to do this, and it’s ok if it doesn’t happen overnight to you either – that isn’t how it’s supposed to be, anyway. Being aware of your flaws and mistakes also involves accepting them. I’ve come to know that one of the best helpers to accepting your flaws is to joke about them, make fun of yourself.

There are periods your life when you don’t even realize a given flaw, or don’t consider it a flaw yet. For example, I spent a lot of time believing that being rude is equal to showing power, only to find out that being rude is nothing but a sign of insecurity. Then, the time will come when you eventually realize that what you considered cool or correct before is no longer in alignment with your values.

Constant Effort and my Chest Workout

In addition to my earlier advice, I suggest you commit to the following rule: be persistent.

I recently joined an athletics group, where we do some weight workouts twice a week. After my first training, I spent half of the evening in front of the mirror admiring my “new” chest muscles. Luckily I did so, because the next day I couldn’t find but the slightest trace of them. The swollen muscles were just the “promise”, they were the illusion of what I could achieve if I worked a little.

Don’t worry though, if little effort shows no results, it simply means you have a bit more work to do. 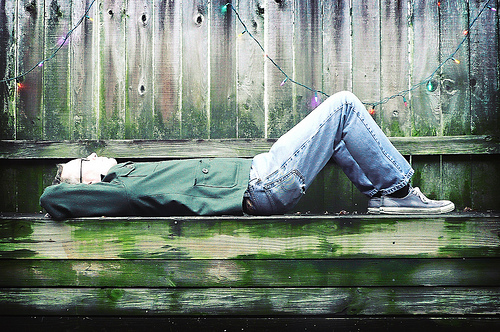 17 thoughts on “A Story of Change: The Slothful Genius”