Fathers can show their children how to change by pursuing their own emergence.

But my dad did not know that we are emergent beings in an emergent universe. He didn’t know that our assignment in life is to grow and develop. To emerge. To change.

Dad never changed, so he didn’t give me a model for addressing my weaknesses, for turning personal difficulties into opportunities to learn, or for examining one’s life.

Dad showed me a model of how to stay stuck

When I was conceived, Dad was 30 years old, out of work, a heavy drinker, in the midst of the Depression in 1935. When he and Mom discovered her pregnancy, they married quickly at City Hall, without money or a place to stay. That night Mom returned to her shared room with her grandmother, and Dad slept in his car.

With this inauspicious beginning, my parents launched their family life. Dad would sell cars the rest of his life, launch his own unsuccessful businesses, and be a difficult husband and an emotionally distant father.

Now I realize that he must have always been depressed. He was stoic about it until he drank, and then he expressed his anger and self-pity in long monologues recounting his victim stories.

His heavy drinking became a life-long alcoholism. In his 60s, when Mom threatened once again to leave him if he didn’t quit drinking, he pretended to quit. Then, after his death, we found bottles of vodka secreted all over the garage.

I didn’t do much better as Dad

With three children of my own by the time I was 25, I had little self-awareness about my role as father. I worked in a factory at night and went to school in the daytime. Later, I was more absorbed by my career than by my role as father.

My children grew up watching two parents who didn’t seem able to change, to correct their mistakes, to become—especially—better parents. Instead, they watched their parents in arguments that were never resolved. They heard all too many angry, bitter exchanges. They saw their father lock himself in the bathroom once to avoid a physical battle.

I knew that my children were not observing a parental model of maturity, love, and poise. But, because my wife and I were not able to learn together, I did not change.

More available emotionally than my father had been, I was, nevertheless, a somewhat aloof parent, unable to gain much new skill and knowledge about fatherhood.

After my children moved into adulthood and after my marriage to their mother was over, I spent many years working to become a better father with some real success.

I’ve learned some key things a Dad can do to give his children a model for change:

1. Assess your own growth and development.

2. Let your kids know that you are changing and why.

A warrior is at war with his weaknesses. Be a warrior father who is open about his weaknesses and committed to changing. Provide your children with a model of adult openness, courage, and change.

An example: Dad has a temper that gets aimed at family members. The children are afraid when Dad gets mad. Dad and Mom have had quality talks about this problem, and Dad has gained clarity about his lack of emotional control, the damage it does, and the poor model he is creating for his kids.

Dad tells his children in carefully planned family discussions that he is sorry about his past expressions of anger. He outlines his goals: he will change his behavior and express his concerns to family members in a gentle, loving way from now on.

He makes a formal request of his children to let him know if he seems angry. When they give him feedback about an angry outburst later, he thanks them, asks forgiveness again, and renews his learning effort.

3. Talk to your children about why they themselves must change.

Dads can frame personal change as a positive, exciting, and beautiful way of living.

Dads can teach their children that changing, growing, and developing can become an artistic process that creates great joy and also practical advantage.

With Dad’s modeling and teaching about personal change, a family’s dynamic can be transformed.

Children can learn from Dad that change is at the center of a vibrant, successful life. 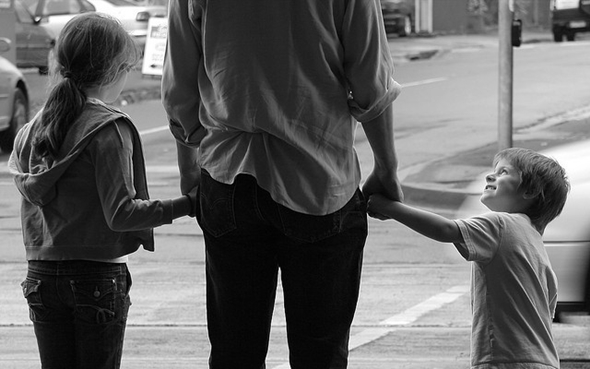 Gary Stokes is the author of the book, Poise: A Warrior’s Guide.  He maps the universe of poise on his blog www.thepoisedlife.com.

9 thoughts on “Dad, Show Us How to Change”