This is not a rags to riches success story, nor is it the story of how I overcame a life threatening disease and made millions. Rather, it is the story of how I have been blessed with the ability to work full time from home as a freelance writer.

My name is Joshua Rarrick, and my story begins in September of 2011. I was a truck driver, who worked full time hauling pipe and supplies to oil field locations in Texas, Oklahoma, and New Mexico. I was away from home for time periods ranging from 5 days to 1 month at a time, and I was longing for a way to spend more time with my family, yet still be able to provide for them.

The Fall of 2011 brought many hardships for the state of Texas, as wild fires ripped through the state. Drought and high wind fueled the fires, sending them tearing through East Texas at an alarming rate. Many of these fires were consuming thousand of acres of land each day, and many homes were utterly destroyed.

Having had training in fighting fires, and worked as a volunteer firefighter in the past, I responded to a fire that had consumed thousands of acres of woodlands, and destroyed multiple homes. Due to the fact that I missed a day of work as a truck driver, I was threatened with losing my job. After 4 days of constant battle with blazes that sometimes reached more than 100 feet into the air, we finally brought the fire under containment.

During the course of fighting the fires, I received severe 3rd degree burns on my right leg, which left me almost unable to walk. After returning to work, I was fired from my job and left with no income, and completely homeless.

When the local news station in Tyler, Texas published a story about the fires, they included the description of how I lost my job. Many kindhearted people offered to help me get back on my feet, including one family in a town about 100 miles South of where I lived.

This family offered me a job and a place to stay, and it seemed to be the perfect solution to my needs. However, just three months after I moved to accept the position, the company folded and filed for bankruptcy, leaving me broke and desperate for a way to provide for my family.

During this time, I began working small odd jobs to try to earn some sort of living, and I desperately searched for a way to earn a steady paycheck. I knew I did not want to take a job that required me to be away from my family, but I didn’t know where to find one that paid well enough for me to support them.

I had heard of people making huge amounts of money online, and I began researching all of the “get rich quick” methods they claimed to be using, but all I found were sites that wanted me to spend $100 or more to get a book explaining how to make money. I was utterly disgusted and discouraged, as I did not have $100 to spend, much less the time to sit and read, when my family needed my help.

During my online search for income, I stumbled across a site called Elance. This site offered real jobs, funded by real people and companies, and it even offered a basic membership for free. Out of desperation, I signed up for the site in July of 2012, and began searching for work.

Before long, I found that because I had strong skills in English grammar and creative writing, there were people who would pay me to write simple advertisements for their products. I began booking small jobs on Elance, and working feverishly to complete them, in order to earn my first paycheck.

I received my first checks from Elance about 2 weeks after I began working on the site, and they totaled $120. I was excited to have finally found a way to earn a living through the Internet, however, I knew I was not making enough to support my family.

I began carefully researching the jobs I wanted to bid on, and began being very selective about which ones I chose. After more than a month of working for as little as $2 for a 500 word article, I finally began to build my reputation in the freelance writing community. Once I had established a reputation, I began bidding on larger jobs, and hiring other writers to help me complete them. These jobs brought me more income, and have finally allowed me to begin supporting my family, as I dreamed of in the first place.

I now make approximately $500 per week working from home as a freelance writer and editor. I have a large group of clients who utilize my services on a daily, weekly, or monthly basis, and I have even managed to break into the field of journalism.

Some of my articles have been quoted by media outlets like FOX Business, Business Insider, and the Wall Street Journal, and I am enjoying my career. The best part about my work as a freelance writer is the ability to be home with my family. I am expecting twins in April of 2012, and due to the fact that I work from home, and set my own working hours, I have been able to attend each doctor’s appointment for the babies. Had I continued to drive a truck, I would most likely have missed many of these appointments.

While this may not be a story about how I made millions of dollars, it is a story about real life success. Success is not measured in dollar amounts, but rather in satisfaction and knowing you are attaining the goals you have set. This is not a get rich quick story, but rather, it is a story of hard work and dedication. It is also the story of having someone who believed in me standing behind me and pushing me to achieve my goals.

This may not be a story of riches, but it is the story of the American Dream. My name is Joshua Rarrick, and this is my story. 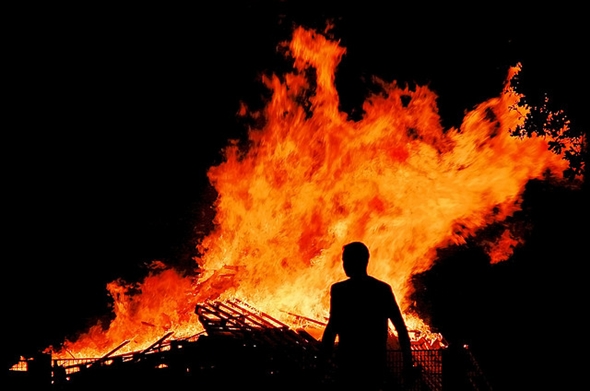 Joshua Rarrick is a freelance writer who resides in Gladewater, Texas with his fiancee, two dogs, and a cat. Joshua runs Sites & Syllables, with his partner Sebastian Scalora. Together, they provide world class web design, content creation, and writing and editing services to their clients. You can find them on Elance, under Joshua C. Rarrick, or contact them via their website at http://www.sitesnsyllables.com/. Also do check out Jeremiah Say's Blog for tips on how to lead a happier and healthier life.

23 thoughts on “From Burned Out to On Fire: My Story Of Personal Success in the Writing World”