Learning martial arts – not the most orthodox way to gain a promotion I know, but martial arts can change your life in a variety of ways. Martial arts can turn you into a fighter in all elements of life and it will give you respect for yourself and others, and improve your health and well-being.

If you’re not the athletic type consider this: Brazilian Jiu Jitsu is often referred to as a “human game of chess” and is renowned for attracting computer geeks, accountants and all other types of intellectuals.

Whether it’s right or wrong, appearance is important. This rule applies in the office. If you want to ward off any possible comparisons with Homer Simpson (and his attitude to work) then you’ll need to be in shape. Training in martial arts is a fantastic way to get fit. Boxing, Muay Thai and Mixed Martial Arts all place emphasis on fitness or ‘conditioning’.

It does not have to be martial arts, but it is important that everyone finds a form of exercise that they enjoy. Whether it’s gardening or mountaineering, keeping fit is important to keep healthy mentally as well as physically. An ‘in-shape’ physique is also important for making a good first impression.

2. No Fear of Confrontation & Control of Adrenalin – Be Polite & Courteous But Direct

Martial arts can reduce an individual’s fear of confrontation and teaches combatants to control the adrenalin rush that kicks in moments before a fight or competition.

Adrenalin must be tamed to the extent that it enhances performance but does not control it. With adrenalin in command, a fighter will often swing punches and kicks wildly for 30 seconds and then be completely out of breathe and defenceless. The martial artist will also lack the ability to adjust and think dynamically, as technique gets violently hurled out of the window and mindless aggression takes over.

There are lessons that can be learnt from this scenario and transferred to the day job. For example, you should never hide behind an email to give bad news or to discuss a potentially explosive or controversial topic. People will respect you more if you don’t hide away from difficult and potentially confrontational situations. If you’re aggressive however, you’ll no doubt end up getting fired instead of promoted. Acknowledge a build-up of tension and adrenalin, and control it. If you are humble and tolerant with others (see point 4 & 5), then being confrontational in the sense that you tackle problems and people directly can be a good thing; something that associates will notice and respect.

Adopting specific elements of a sparring mind set can assist when undertaking less exciting tasks at work. Don’t give up when you’re tired and don’t back down when the going gets tough. To get through the pain of lactic acid and of sore muscles and limbs you will require a focus and an ability to shut out pain and fatigue. Hitting deadlines in work is not quite the same, but you need similar focus and motivation to get the job done.

See any task in work as a challenge and attack it with enthusiasm whenever possible. I personally believe that approaching tasks, even the boring or stressful ones found at work, with enthusiasm and determination is the one sure way of enjoying them. Sparring in martial arts is the same, if you don’t focus and adopt a highly motivated frame set, you’ll likely end up hurt and your training partner will grow tired of your poor attitude.

4. Tolerance – Be Patient With Others Who Are Still Learning

You may be good at your job, but if you start martial arts as a complete newbie, you’ll likely be pretty poor compared to others. This can help you empathise with others who are perhaps not as good as you at their job but make genuine efforts to do their best. In addition, you often have to partner-up with people you don’t know and once you’re experienced you’ll have to tolerate beginners who take longer to grasp techniques than you do, or who can’t hold the pads how you’d like. You will have to be tolerant and patient with yourself and others, you can’t lecture someone for ‘underperforming’ in a martial arts class; this will help you to be more tolerant of others in work.

Related to point 4. It’s easy to be arrogant when you only do things you are good at. It’s also easy to evaluate and judge everyone else at things that you excel at. Stepping out of your comfort zone can give you a whole new perspective; as can a good kicking. One instructor I had, advised his class to ‘pin their egos up’ with their coats as they entered the class. A good tip when entering the office too.

Ditching your ego and being more empathetic with the intern who can’t do VLookup on Excel will make you a better person to work with. Again, if someone is struggling to learn something that you think is easy, chances are you haven’t taught it well. Maybe because you have forgotten what it’s like to do something that’s not part of your daily routine, or maybe you have become impatient and arrogant in your old age!?

You will never become a proficient martial artist if you don’t go training when you’re tired or stressed. You will have to discipline yourself to get to the gym/dojo in all weathers and despite different setbacks and demotivating circumstances. Turning to sparring again, you will have to be disciplined so that you do not get angry when you take a good punch or kick. This will help teach you to react positively to challenges in work and to retain your professionalism in spite of stressful situations.

In work, never put off a mundane or stressful task that has to be done. Don’t overthink it or procrastinate over it either. Attack it (metaphorically speaking!) with enthusiasm and a positive attitude.

Nothing beats punching and kicking or even throwing something or someone for releasing stress! Martial arts is well known for its ability to release stress and endorphins after a tough day at the office. Great for your mental wellbeing and your ability to arrive at work the next morning feeling refreshed. Some people prefer to knit or read to release tension and stress but everyone needs an activity to release and let go the worries and concerns that can build up in a stressful work environment.

If there is one trait that seems to be universal to all the ‘heads of department’ and managers that I have worked with over the years, it is confidence. Training in martial arts can be a fantastic way to build your confidence. Once you’ve been kicked in the head a few times, you’ll feel able to tackle anything! Martial arts can also give you a great sense of belonging and if you train at a good club, you’ll be surrounding by people who will encourage and motivate you.

In the office, it’s unfortunate but people tend to mess with or take advantage of those that are perceived as weak. This shouldn’t happen if you are confident and a bad ass martial artist! It’s not the ability to fight though that wards off the bullies, it’s the confidence that comes with it.

Self-confidence, for whatever reason, seems to be the key to success in almost every element of life. Martial arts is a great way to build confidence; it’s also a great way to rebuild self-esteem after a bad day at work. If you don’t like martial arts, it is still great to have a past-time that will surround you with supportive and positive people, and will build confidence through the challenges that it will pose.

Photo by Git Down 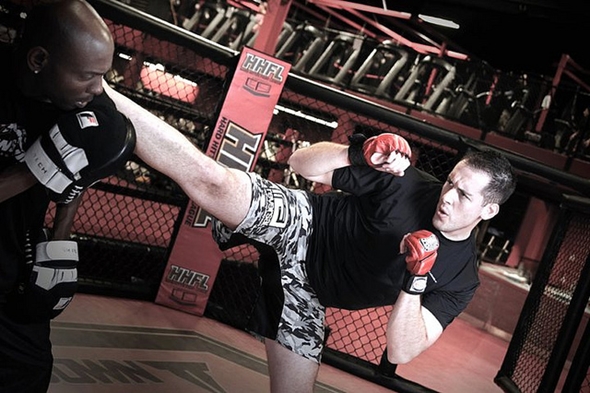 Andrew Griffiths is a keen martial artist and studied Sport Science at Loughborough University. He can be contacted via the Twitter handle @MMATraining1980.