Update from Last Month: I told you last month (when writing about “How to Grow Outside Your Comfort Zone”) that I was going to send out five magazine pitches every week. I’m happy to say I’ve done it, though I’m going to take some time now to try to build up a portfolio of printed clips from student press, as the response rate to my queries wasn’t very high.

I’ve also made a real effort to be less shy in my first couple of weeks at Goldsmiths; I’m going to a graduate event this afternoon which I’m a little nervous about, but I’m already starting to feel more confident striking up conversations with strangers!

This is quite a change from five years ago, when I was an 18-year-old undergraduate. When I first went to university, personal growth wasn’t high on my list of priorities. Playing online games, getting hideously drunk on a regular basis and alternating between anxious dieting and stuffing my face with junk food all dominated for the first couple of years. But when I reached my third year, I signed up for a course called Springboard, a “Women’s Personal Growth Program”.

I’d known about the Springboard course in my first and second year, but I’d hesitated to join it – even though it was free. I was worried it would be “feminist” in a militant way (I had a lot of platonic male friends, and didn’t want a series of man-bashing lectures), and I thought “Personal Growth” sounded new agey and “not me”. But I decided to risk it, and signed up for the course in my third year.

It would be no exaggeration to say that Springboard got me started on changing my life.

Far from being “new agey”, I found that personal growth was eminently practical. Although I was not someone who struggled much with procrastination and time-management (I’ve always been quite an organized person), I found the sessions on relationships and goal-setting very useful. The course ran across four full days, about one every couple of months, and I was invigorated and inspired after each.

As a result of Springboard, I began:

The Springboard workshops also had a great resources table, with books, leaflets and magazines. I picked up a copy of Mark Forster’s Get Everything Done (And Still Have Time to Play) to flick through, and was quickly hooked. Forster’s approach to time management was different from the advice that I’d come across at school and university – things like splitting tasks into “urgent and important”, “urgent and not important” and so on. He explained why traditional methods of time management don’t work – and I found that his methods did work for me. You can see from the following quote how his advice is refreshingly different from some of the regularly trotted-out tips:

“One of the most effective ways of planning is to imagine yourself in the future as having achieved the goal. Then, looking back, describe how you got there. Imagining yourself in the future looking back is far more effective than the way we usually plan, which is to look at the goal from the present and try to work out what steps we could take. This is treating the goal as a problem to be solved. While looking back at it from the standpoint of the future treats it as an achievement that we can describe.” – quoted from Plan Backwards on Forster’s blog.

I bought Forster’s other books and have re-read each several times, and also began following his blog. His advice is aimed primarily at business executives, but I found a huge amount that was applicable to me as a student (and which has helped me now as a freelancer).

His method of “self-coaching” helped me through my finals, and I graduated with the 2.i grade that I’d been aiming for. I’d also finished the novel I was writing. The one area of my life where I was struggling was with finding a career – or even just a job… My days of regular student loan payments were over, and I was dipping into my savings, which I felt guilty about.

I spent the summer back in my family home, sending out job applications and feeling more and more down and discouraged. I found re-adjusting to family life with parents and siblings difficult. Well-meaning people at Church kept asking how the job hunt was going…

I felt at a loss. The one thing I’d wanted to do after I graduated was an MA Creative Writing program at the University of East Anglia – but competition for the course is very fierce, and I didn’t even get interviewed.

I was twenty-one and felt like a failure. For some reason, I’d convinced myself that I should do anything to avoid living at home after university (I realize now that my parents would have been happy for me to stay as long as I wanted, but I had it in my head that I shouldn’t impose on them). I could only see my boyfriend once a fortnight, and wanted to live nearer him. When I was offered a job in technical support in London, despite the role being a poor fit for what I really wanted to do, I took it.

It was around a month after I started working in tech support that two things happened. First, I started thinking “Is this it?” The first few weeks had been relatively interesting –I was learning a lot of new things. But I was starting to realize that the usual day-in-day-out sameness of work wasn’t going to suit me …

The second thing that happened was I read Steve Pavlina’s article 10 Reasons You Should Never Get a Job. I wished I’d stumbled across it at the start of the summer…

Despite making me rather depressed about the day job (in fact, I tried to repress my feelings for a while and convince myself that I’d done the right thing), Pavlina’s article led me to read others on his site. I found time to finish the rewrites of my novel, working in the evenings and at weekends, and then began writing short stories in 2007.

From reading Pavlina’s articles about how much he made from blogging, I became interested in “pro-blogging”. I’d kept a personal blog on and off for several years, focusing on university life, but I’d never come across the burgeoning field of professional, topic-based blogs.

During 2007, I wrote a couple of articles about eating healthily and exercising around a 9-5 office job – I’d been reading slimming magazines regularly since my teens, but was growing frustrated with the lack of practical advice in them for full-time employees. The magazine I pitched the articles to was uninterested, so I went to my fallback plan … starting a blog on the same topic.

I launched The Office Diet on January 1st, 2008, hopelessly misunderstanding how search engines worked, and convinced that I’d get lots of traffic from New Years Resolution-Makers searching for “diet”. (I know all the bloggers out there reading this are laughing at me now!)

I also began to read a lot more blogs, particularly ones focused on personal growth. Pick the Brain, Dumb Little Man, and The Change Blog rapidly became new favorites. I now staff write for all three of those – a job that I didn’t even know existed a year ago!

I’m back at university again, at Goldsmiths College in London, living out my dream of taking an MA in Creative Writing. This time, I’m much more focused. I want to get the most I can out of my two years at Goldsmiths, and I’m trying to attend as many extra seminars and events as I can. As I mentioned last month, I’m focusing on being a bit less shy and trying to make new friends.

I’m also very keen to carry on working on myself: I’ve realized that personal growth is a never-ending quest. The time, space and support structures available at university make it – for me – a wonderful time to experiment, to learn more about myself, and to gradually get closer and closer to being the person I want to be. As part of this, I’ve launched a new blog, Alpha Student, where I’m sharing my past and current experiences with other students to encourage them to make the most of their time at university.

If you’re currently a student, please take some time to step back from the whirlwind of daily life to think about what you really want to get out of your time at university – and what you want to do with the future ahead of you. I wish I’d not burdened myself with the imagined expectations of others; I should have stuck with what I wanted to do (write!) when I first graduated.

Even if you’re not at university, what I’ve learned is that it’s never too late to get started on personal growth. I wonder what would have happened if I’d taken that Springboard course in my first year as an undergraduate – I suspect it would have led to even greater positive change in my life.

It would be great to have some of your experiences of personal growth – especially if, like me, you got started on it as a student. And if you’ve got any advice or comments on anything I’ve written, I’d love to hear that too!

Photo by Tambako the Jaguar 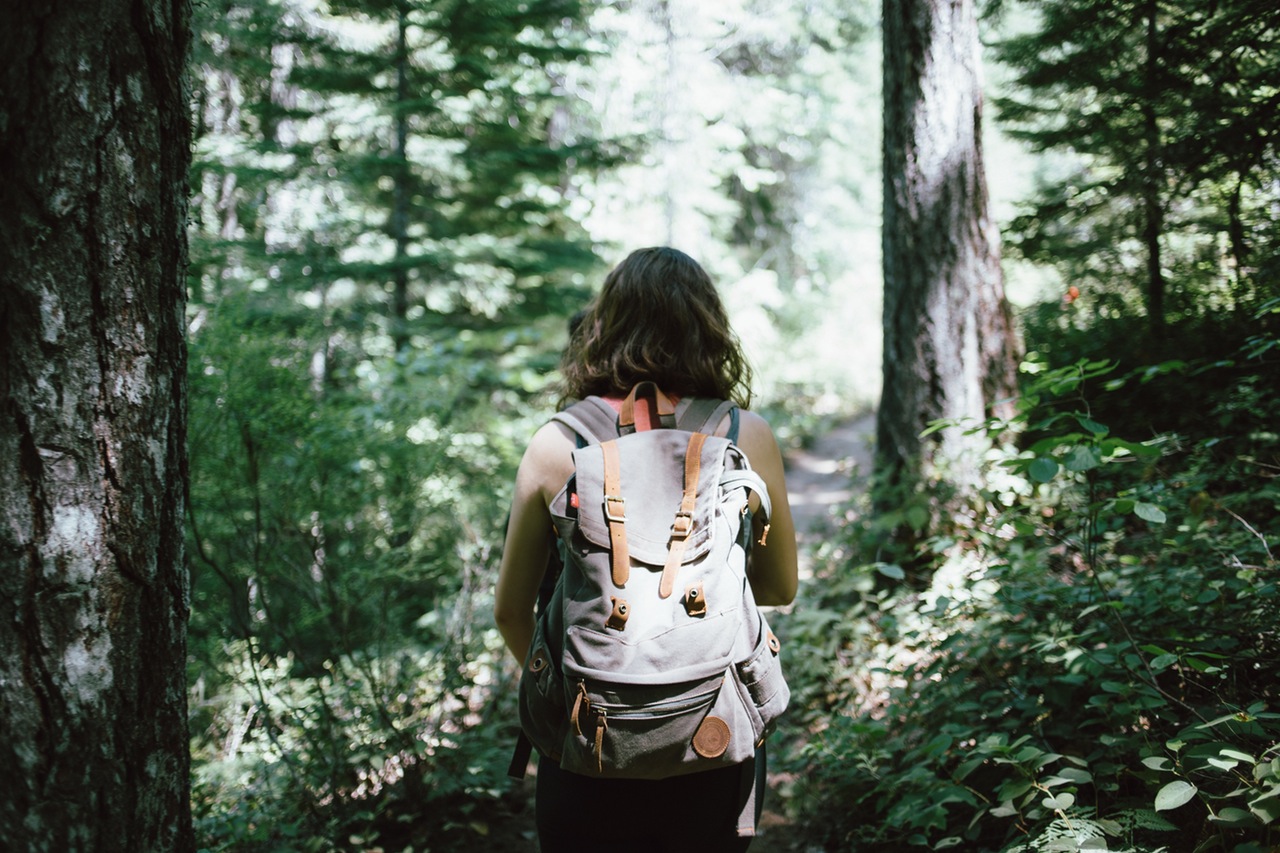 19 thoughts on “The Winding Path: How I Started a Lifetime of Personal Growth”