I reached up and rubbed my eyes. The glare from the screen stung them fiercely and I was developing an epic crick in my neck. I had redesigned this poster maybe 10 – 15 times. I put the final touches on it, printed it out, and took it to be approved.

“It looks too sad,” she said to me with the calm demeanor of a Zen master.

“But the event is about medical professionals that need relief from stress and grief. I used this picture because I thought they would identify with a picture of a doctor who looks worn out.” I replied

“I understand that, but it still looks too sad.”

That was all she had to say. I knew there was no point in arguing with her further. Once she made up her mind it wasn’t worth arguing about. So, I went back to my desk and started to work on a new revision.

I was so tired of it. My schedule was extremely demanding. I woke up at 3:50am and didn’t get to bed until after 10:00pm. I felt annoyed and exhausted, but worst of all I felt bored.

My whole life I had fought that feeling, the dry, stale, emptiness of being completely bored with something. As I stared at the screen, I wondered, “Why am I doing this?”

Why am I putting up with this intense schedule, the structure of seniority that discourages self-expression, the strict dress code, and the separation from what most people would consider a ‘normal life’?

I had had enough. Right there in that moment. I made a decision that would change everything. It would be the most important decision I’d ever made in my entire life. I decided to stay right there and keep going.

I know what you’re thinking. This is the part of the story where I should say screw this job and walk out the door to go live my dream. And for many people that would’ve been the right thing to do.

But for me it wasn’t and let me tell you why.

My whole life I had tried my best to follow this one truth: Fear is the one thing that holds people back from being happy.

So, I vowed to be unafraid of taking risks and follow my dreams. And that’s exactly what I did.

Whenever someone told me I couldn’t or wouldn’t do something, I disregarded them and made it happen.

People told me to major in something practical at school. So, I majored in philosophy. I did it not only because I wanted to be fiercely impractical, but also because I loved philosophy. (I even have a tattoo of a famous Cartesian saying on my back).

When a friend in college invited me to spend the summer on her farm in Belize, I agreed to go. But she didn’t believe me. She told me lot’s of people said they would go, but didn’t.

5 months later, I was in the middle of the Central American jungle husking coconuts and trying not to scratch the obscene amount of mosquito bites I had accumulated.

When I was working in the music business, I decided I wanted to work for this guy I knew and admired. He was a well-known artist manager in town. So, I started calling him regularly and every time he would tell me he didn’t have anything for me.

But I didn’t give up. I called him once or twice a month for a year. Until finally he gave me a job as a guitar tech for the Gin Blossoms and I spent the next couple years criss-crossing the country as a rock band roadie.

There are plenty of other examples, but I think you get the point.

I believed that if you want something, you should go for it. But the problem was I lived my life by this one rule. And one rule, no matter how good, has its limits.

Though I had conquered one problem, I wasn’t confronting another. I didn’t know who I was or what my purpose was in life.

For many people the problem is they aren’t willing to risk what it would take to follow their dreams. My problem was that I wasn’t willing to risk sticking with one path. I didn’t stay anywhere long enough to find out what was at the center of all of my dreaming.

By the time I was 28, I had worked 28 different jobs. That’s one job for every year I had been alive. Here is a list of all of them:

I had lived an amazing life, but I wasn’t happy.

While I was working my last job on the list as a house manager of a local music venue, I caught my boss stealing money from bands. Specifically altering the amount of tickets we had sold.

I didn’t know what to do. I knew it was wrong, but I needed this job. If I confronted her, I risked losing my job. But if I didn’t I wasn’t sure I could live with myself.

As I contemplated this question, I realized that I had been letting myself slide into this moral grey zone for a while. And I didn’t want to be there anymore.

Even with all the risks, I decided I had to confront her. She tried to convince me it was no big deal (which didn’t work), but eventually apologized through crocodile tears. And swore she’d never do it again.

Despite all of her assurances, a month later I lost my job. I didn’t know where to turn. I felt lost, hopeless, and depressed

I had worked 28 jobs and each one bore me to tears or stressed me out beyond belief. And now I had done ‘the right thing’ and was SOL.

That’s when I met Lowell. I ran into him at a friend’s party and I couldn’t figure him out. He was in his early twenties but had the same calm demeanor of someone twice his age.

I didn’t know what his secret was, but I knew I wanted to find out. So, I started asking him questions and learned that he had been living at a Zen monastery for the last few months.

He told me a little bit about his journey. And at the end of the party, he invited me to come and sit with him at a local Zen group.

So the next week I went and meditated for the first time. I loved and hated it.

The more I sat I realized there was something to this. And since I had no job prospects, I decided to go to the monastery for a month or two. I figured worst-case scenario I’d leave after a few months, go find a new job, and have a good story to avail cute hippie girls with.

The first few months were great, but eventually the novelty began to wear off. I realized it was happening again. And that’s where I started this story.

Here I was at this tiny monastery, a place of peace and tranquility and I was miserable. I started thinking about moving on, but I couldn’t think of anywhere else to go.

My whole life seemed like a big pointless joke. But just as I was about to the throw in the towel, I remembered a teaching that helped me see things differently.

It was a few simple words spoken by one of the senior priests at the Monastery. One day when we were talking about following your passion he said, “To live a fulfilled in life you must find something that is deeper than passion.”

I had spent my whole life following my passions, but they had led me nowhere. I realized that while passion is important, passion without purpose is empty.

I knew that if I wanted to change my life, I needed something that would keep me going even when my passion faded.

And I knew I would never be able to find it if I left. Many parts of me told me it was time to go. But another part of me knew I needed to stay past the point of comfort.

I spent many days and nights like that. Wondering why I was there, but something amazing happened when I stuck it out. Through deep personal work and perseverance, I discovered my life vow.

It came at the end of a long silent retreat where I had done fierce battle with my own demons. I realized that my purpose was to help others. The more I held this vow I realized that I was called to do that as a teacher.

Now everyday I wake up and write, I vow to be of deep and fundamental service to others. I vow to become a teacher that encourages and inspires others to change their lives.

This simple act reminds me of every lesson I learned at the monastery.

The monastery taught me so much about myself and my mind. And the strength and tools that I gained there have helped me continue to create radical change in my life and in the lives of those around me.

So often, when we hear the stories of life transformation the protagonist only needs to have the courage to follow his passion.

Success stories often leave out the sleepless nights, the internal conflict, and the crippling self-doubt that many people endure to find their path.

If you haven’t taken the risk to step outside your comfort zone then you should do it, but don’t forget change isn’t the answer to everything.

If you really want to change your life, sometimes what you have to do is not change. Instead, you have to stick with something that is hard and arduous. You stay not out of guilt or obligation, but because you have faith in your own heart and mind.

There is a big difference between being stuck and being determined. As you begin or continue your journey to change your life, remember: passion comes and goes, but knowing and living inline with our deep purpose creates the biggest change in our lives and in the world. 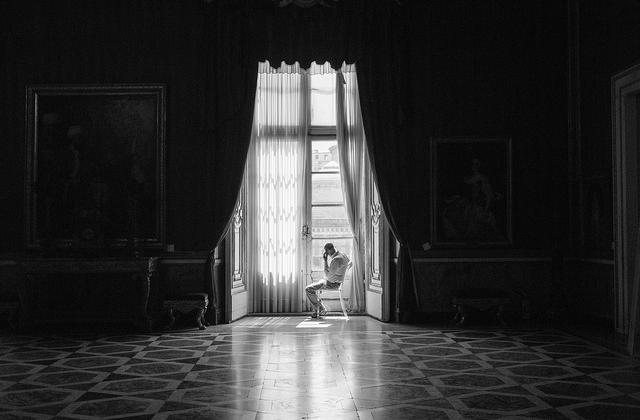 Samuel "Gentoku" McCree is a Mindfulness Based Personal Trainer and Happiness Coach living in Portland, OR. He trained for over 2 years at Great Vow Zen Monastery and now strives to help people transform their lives through mindfulness and movement. He is a thought leader of a new and fast growing community of people who are harnassing the powers of fitness and the mind.  His blog about fitness, mindfulness, and transformation can be found at mindfitmove.com. He also has created a special offer just for Change Blog Readers.